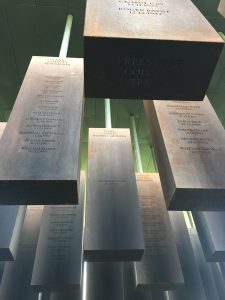 A major focus of the Poor People’s Campaign is connecting the dots between poverty, militarism, racism, sexism, Islamophobia, homophobia, transphobia and all the other isms. They are all connected.

In the middle of the 6 week campaign I traveled to Alabama (my home state, by the way), a state so racist that the welcome center on I-85 greets visitors with a monument built in 1923 by a known white supremacist, Marie Bankhead Owen, with the state motto, “We Dare Defend Our Rights.”

We were visiting Montgomery where there’s signage, history markers, and directional signs for a confederate tour, but finding Dr. King’s Dexter Avenue Baptist Church isn’t easy at all.

We visited the new Legacy Museum and Memorial—the museum that traces the history of Black people in these United States from enslavement to mass incarceration, from lynching to police brutality against Black bodies.

We walked around and under the rusty brown coffin shaped hangings—with names etched in them,names of brown and black people killed, more than 4,000 of them, killed in acts of terror, racial brutality, killed because of the color of their skin.

You see, white supremacy has been ripping Black and brown babies from the breast of their mothers since its beginning.

This is who we have been.

But this is not who we have to be.

The good news of the Gospel of Christ is that we can choose to live a different way. We can choose to love our neighbors, to expand the borders so that no one is left out, to share our goods so that everyone has enough.

Because we’re all connected. 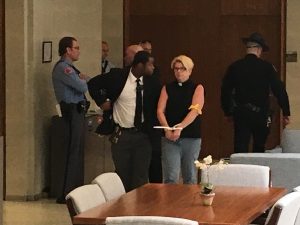 The theme of the second week of the Poor People’s Campaign was “Linking Systemic Racism and Poverty: Voting Rights, Immigration, Xenophobia, Islamophobia, and the Mistreatment of Indigenous Communities.” That’s kind of a long title. But it encouraged me.

I love some people who are immigrants, documented and undocumented. I toured Stewart Detention Center, a for-profit detention center run by ICE (Immigration, Control and Enforcement) and heard directly from detained people that the water there runs black out of the faucets… that’s when there is water. I have trusted colleagues who are Muslim. And I believe that this nation was built on two lies: 1) that God was on the side of the Europeans who came here, and 2) that we came in peace.

I decided to risk arrest by direct action in Raleigh, N.C. on the second week of the Poor People’s Campaign because I think racism and poverty are connected, and, as the song goes, somebody’s hurting my people, and it’s gone on far too long.

So we gathered in the General Assembly, sang songs, chanted, and demanded justice for Black, brown, and poor people. And we were arrested.

(For those of you who are Alliance of Baptist folks: I was arrested with fellow Alliance folks from Circle of Mercy in Asheville!)

Little did I know, though, what I was in for in the Wake County Detention Center. You see, I was born in Tokyo, Japan; my father was in the Air Force. I was asked my birthplace, and that won me an interview with an ICE agent. Oh, the irony! By the way, proving your citizenship isn’t easy, even if you speak the language. I could imagine the fear I’d feel if I didn’t speak the language.

I’ve had a few people ask me what difference getting arrested makes. Civil disobedience is a public act of disobeying the law—and its purpose is to convey a political message. What’s the message of getting arrested and charged with trespassing in the General Assembly building? It is simply this: This building belongs to the people… All the people…

There’s a chant that we said most weeks during the Poor People’s Campaign, and it was true as I sat in the General Assembly building as it is today… “Whose House? Our House!”

In  this time of injustice when children are being separated from their families, when a heavier tax burden is being placed on the poor than on the rich, when we’ve barred visitors from Muslim countries, when lands that are sacred to the first peoples are being desecrated by mining and polluted by greed, who do we follow?

In this time when faith leaders are throwing their weight around to support gun ownership, Muslim bans, and women staying in abusive relationships, who do we follow?

As I have sought to find worthy leadership, I’ve looked for three things: 1) competency, 2) clarity of purpose, and 3) inclusion of all peoples. I’m thinking about it this way: Moral leadership must be calling us to justice, it must be clear on goals, and it must actually be able to get its message out and organize people to make a difference.

There are individuals and organizations right now who have clarity of purpose, and who are doing good justice work. But few are making it on all three of those marks.

The biggest question I had was whether they were competent at organizing, getting a national movement off the ground. On May 14, the first of the 40 days of Moral Action, I was trained and ready to participate in a direct action event, which we did in front of the General Assembly. What I saw? Earnest people, willing to risk arrest, willing to stand for the poor, for women, for people of color.

The campaign stands in the great moral tradition of Dr. Martin Luther King, Jr. and it has strong leadership in Rev. Dr. Barber and Rev. Dr. Theoharis. Finally, the movement is being built with the voices and actions of the people. In the first day of action, there were rallies in 39 states, and more than 1,000 people were arrested.

Only time will tell whether the Poor People’s Campaign will spark the national imagination to create change. For now, for me, it feels like it is full of potential!