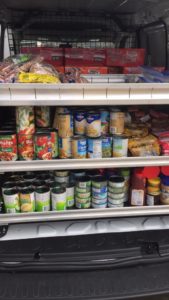 her Teresa said, “If you can’t feed a hundred people, then feed just one.” Sometimes, the issues that face the world and our community appear insurmountable. Consider hunger. At least 62,590 people are food insecure in Forsyth County. Of that number, 31% don’t qualify for SNAP Benefits.  Hunger is an important issue in Winston-Salem and to many at Wake Forest Baptist Church.  Recently, we began partnering with New Communion Mobile Food Pantry. This partnership expands our efforts to reach a broad array of local people. The second Sunday bean offering goes towards New Communion’s efforts to share food with those who face limited access to it.

Food access challenges efforts to alleviate hunger. There is an abundance of food in the world, but people cannot get it because of finances, geography, or both. In our area, many people live in food deserts. A food desert is an area in which the nearest grocery store is one or more miles away. New Communion brings the food pantry to these neighborhoods. This work addresses food insecurity for folks in these areas via direct access to fresh food and pantry staples. New Communion serves specific neighborhoods located in food deserts including Cardinal Acres, Castle Heights, Monticello Park, Northwoods Estate, Prospect Park, Bowen Park, Dreamland, Ladeara Crest, Eastgate Village, Lakeside, Spaulding Drive, and Wildwood Park. No form of identification or paperwork is required from anyone seeking food. Currently, New Communion feeds 100 families each week partnering with local churches, the Community Mosque, United Way, and others.

You can find more information about New Communion here 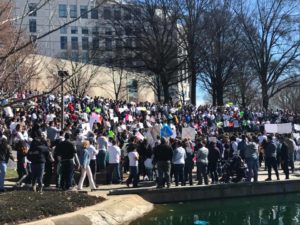 There is a  national protest today called “A Day Without Immigrants.” Workers and students who have immigrated to the United States are striking, showing in a non-violent way, how important immigrant presence is here in Winston-Salem and in the nation.

This is a photo of marchers in downtown Winston-Salem, standing up against the new anti-immigration Executive Order, taken just this afternoon. There are stores and restaurants that are closed. Do you know anyone who went on strike today?

A few weeks ago, we sent a letter of support to a local Latino congregation, El Buen Pastor. Today, we received their reply. The original is surrounded by signatures of our brothers and sisters in Christ, but you’ll have to come Sunday to see it: 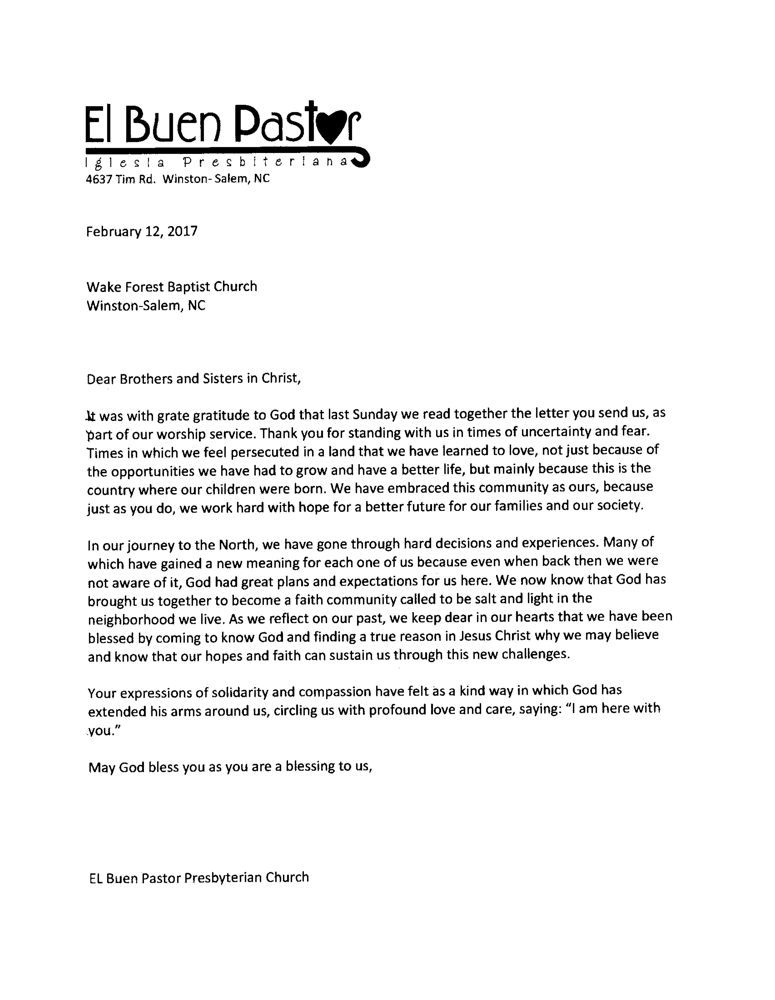 These are our brothers and sisters who have come to our country for a better life. Let’s recognize their contribution and be prepared to support them whatever comes. 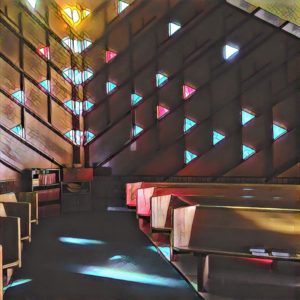 A Review by Elizabeth Corney

Sunday, January 22 2017, two days after the inauguration of a new president, about one hundred people gathered at Parkway United Church of Christ for a prayer vigil. Already, controversy swirling as the press and the new administration went head to head over which “facts” to report. Despite the energy of the Women’s March, there was still a sense of concern for the coming days.

In the face of uncertainty, people of faith came together to pray and read from their sacred texts. One part of this particular service included a litany that Elizabeth Corney wrote with help from ministerial colleagues. Perhaps you would like to use it in your own prayers.

Merciful God, we are grateful for your care and faithfulness to us in past ages. You strengthen oppressed people calling them to break down walls in hopes of a better future.

We are grateful for those who have gone before us in the struggle for liberation. We celebrate their work and their victories securing our freedoms.

We fear for the future, some of us for our very lives. Already, we see hate seeping into the mainstream as space and bodies are violated. And so, we pray…

For those facing loss of health care coverage.

For those who are LGBTQIA and whose very right to exist is under attack not just by lone vigilantes, but the very institutions meant to protect them.

For women, whose rights must include physical safety, economic equality, and bodily autonomy.

For people of color threatened by state sanctioned violence, lack of resources, and the school to prison pipeline.

For all whose faith marks them as targets for hate speech and violence.

For refugees fleeing turmoil and for immigrants seeking the American dream.

For Mother Earth facing destruction for our worldly gain.

For our protections provided in the Constitution

Strengthen us to stand up for justice for all people. Help us restore civil discourse despite polarizing divisions. Help us reestablish credibility in an era when truths are no longer accepted as truths and falsity given voice and credibility. Help our government to remember their duty to serve all regardless of status.

God of freedom, may the memory of the past inspire us to hold fast to the liberty we enjoy today, and more sensitive to the rights of others. May we never cease to work for the day when oppression will be no more, and all of humanity will live with liberty, justice and peace. Amen.

We sometimes set aside spiritual disciplines like prayer during crises because it seems such a small thing to do, but the smallest things turn out to be full of meaning and power. This prayer vigil did not immediately transform reality or eliminate fears. However, coming together reminds us that we have coconspirators in resistance. It helps break up the cycle of worry with contemplation and inspires action in response.