I know you know about Aleppo, Syria. After Syria’s 2011 Arab Spring protest descended into civil war, and Aleppo became a key base for rebel factions against the Assad regime. In the summer of 2015, it looked like Assad was losing ground and the grip on his power, but then Russia and Iran increased their support. In February, the Assad regime, with help from Iran, cut off supplies to 320,000 people. Whether through starvation or nonstop bombardment from Russian and Syrian warplanes, 90% of the rebel holdings fell on December 12. This is probably the worst mass slaughter of people since the genocide in Darfur. Women in Aleppo have committed suicide in Aleppo, to escape the war crimes that would be perpetrated against them. There have been untold atrocities. Al Jazeera estimates 450,000 dead and 12 million Syrians displaced.

Don’t ask me who is right and who is wrong, who are the good guys and who are the bad guys, because nobody knows and frankly, it doesn’t matter. What matters is that it’s happening right now, in front of our eyes, and nobody in France or in the UK, or in Germany, or in America is doing anything to stop it. Who is marching in the streets for the innocent men and women of Syria? Who is shouting for the children? No one.

I’ve been haunted by the cover photo of the New York Times on Tuesday. 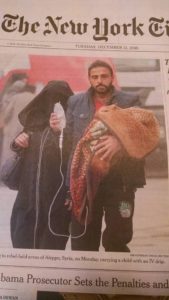 It was a photograph of a Syrian man carrying a small child with a IV held up in the air. He was next to a woman in a niqab—and all I could think of is the little baby Jesus.

Remember that Advent is the season of expectation, of waiting.

Of seeking the light that is going to break into the world on Christmas morning,

in the shape of a little tiny, brown baby, born into poverty,

to a people without political power,

to a mother who is unmarried,

a father who is absent throughout his life,

born when the nation is ruled by a despotic dictator,

with a deep, abiding paranoia.

That little baby in his or her father’s arm could very well be the child we are waiting for.

The child through whom

God is going to break into the world.

and help us to love one another better.

It may be that I’m nearing 50 and this will be my first married Christmas, but I find myself particularly struck by Elizabeth.

Elizabeth and her priest husband, Zechariah, were righteous before God, but barren and older. Luke chapter 1 tells us that Zechariah is chosen by lot to enter the sanctuary, and Gabriel the angel shows up. The angel says, “Do not be afraid. Your wife will bear a special child.” Zechariah doubts, and asks the angel, “How will I know this is so?” So Gabriel mutes Zechariah, and Elizabeth gets pregnant.

It’s an old familiar story—it’s the story of Sarah, Rebekah, Rachel, Samson’s mother (unnamed), and the Shunnanite women of Elisha’s time. These women were unable to conceive, but with God’s intervention, they did. Elizabeth joins the ranks of a special group of Jewish women.

But the becoming pregnant part of Elizabeth’s story is not the part that fascinates me. Instead, it’s the story of the friendship of Elizabeth and Mary. Soon after Elizabeth finds she’s pregnant, Mary comes to visit.

There are three questions I want to ask:

I think Mary came to Elizabeth hoping to find a port in a storm. Mary’s pregnancy would be visible just around 3 months, and she’s unmarried (although betrothed, which may have been a good sign for the marriage if only she and Joseph had consummated the betrothal), estranged from both Joseph and her family, and poor.

I wonder if she wasn’t going to Elizabeth to hide.

But why would Elizabeth welcome Mary? The text tells us that Elizabeth was “righteous before God, living blamelessly according to all the commandments and regulations of the Lord” (Luke 1:6). She had full right to shun Mary, the unmarried pregnant girl. But she doesn’t. Elizabeth is good.

And then finally, I wonder if Elizabeth is just plain generous. She gives out of her heart, expecting nothing in return, and is able to be present to Mary out of that generosity.

What did it do for Mary? It was at once the gift of excitement (among family members who were not at all excited by her pregnancy), the gift of sustenance, and the gift of calm. Remember that Mary had gone “in haste” to Elizabeth. But she slows down and stays for three months. It was also the gift of hope. After Elizabeth’s greeting, Mary finds her voice to praise God in the midst of her hardship.

In these troubling times, let’s all try to be like Elizabeth. Wise, warm, and welcoming. Hopeful, helpful, and humble. And supporting the birth of a new thing in our world, God breaking in to create a kin-dom of justice, of peace, and of love.