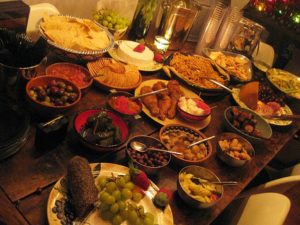 In 1963, I was a freshman at Wake Forest College and my brother was a senior. On November 22 of that fall semester, President John F. Kennedy was assassinated. Everyone alive says they remember where they were when they heard the news. I was outside Tribble Hall, which at the time was called “The New Building.” The first thing I really remember about the day after hearing the news, was my brother calling and saying, “We have to get out of here.” Classes were over and everyone was crying and, as I have learned later in life, young people are particularly inclined toward mass hysteria. How my brother instinctively knew to get to a safer, more stable place, I’ll never know. As a senior, he was allowed to have a car on campus. We drove to Big Mama and Granddaddy’s home in Mocksville, just 30 miles from Winston-Salem. As I have already mentioned in other stories, Big Mama always laid a table with an incredible variety and amount of food. I remember my grandfather saying the same things at every meal. He would say, “If you don’t see anything you like, we can make you a peanut butter sandwich.” If children at the table were eating gravy bread which he encouraged, he would quote the Bible, “Man cannot live by bread alone.” If you did not eat bread, he would say, “Bread is the staff of life.” The routine was comforting.

The assassination was on Friday and we ate our way through the weekend. We watched TV along with everyone else and saw Lee Harvey Oswald shot. My grandparents had lived through the Great Depression and world wars and, as is true of people with experience, as bad as things are, it is usually not the end of the world. They somehow imparted that to us that weekend. I remember us finishing one huge meal and Granddaddy pushed back from the table, slapped his knee and said, “OK, let’s go watch old Oswald get shot again!” I still feel grateful for his humor and being shepherded through such a turbulent time.

TODAY’S ADVENT ACTION: If you are young and are living through a traumatic event, spend time with an older person who has experienced other difficult situations during their life. If you are an older, experienced person try to provide a safe haven for young folk who may be experiencing trauma for the first time.