On Saturday, October 14, 30 members and friends of Wake Forest Baptist Church showed up to stand with our LGBTQ siblings at the Winston-Salem PRIDE parade. Pastor Lia promised to wear a tutu if 20 showed up, so she tutu-afied. And we had a bubble blowing unicorn on our parade truck.

Here’s a picture of our crowd: 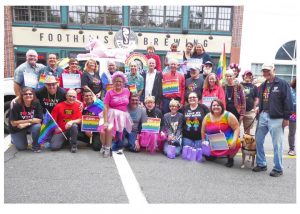 Thanks to all who showed up to show our LGBTQ siblings that exclusion and discrimination are not the Christian way! 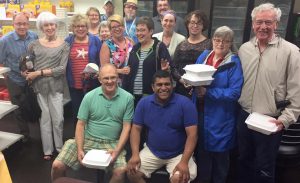 Here at Wake Forest Baptist Church, we’ve been working to turn our neighbors, especially our newest neighbors, refugees and immigrants, into friends. In this new anti-immigrant administration, it’s important for us to reach out to our neighbors. Do you know that Latinx-owned businesses are struggling right now because of the fear many have about Immigration Control and Enforcement? And what better way to serve your neighbors then to frequent their businesses!

Our first initiative re-created our Wednesday night suppers. Instead of eating in our regular place (the Lower Auditorium of Wingate Hall on the beautiful WFU campus) we went to local Latinx owned restaurants for “comida tipica.” Tacos, pupusas, and Italian (although the Italian restaurant was Muslim-owned). Along with getting to know neighborhoods and businesses that we weren’t familiar with, we took Spanish lessons so that we could have the building blocks for relationships.

A few ministers have asked how to replicate our Wednesday night programs. So, first get some excellent interns who speak Spanish. They planned the Spanish lessons, which included translation of news articles for the advanced table and basic vocabulary for the beginners. Next, use this list as an example of how to do…

After only a few weeks, one church member told the story of doing her Meals on Wheels route, with one Spanish speaking family. She was able to say to the woman, “Hello. It’s nice to see you. My name is Judy.” The Spanish-speaking woman invited Judy into her home, and even gave her a gift of dish towels. Judy turned a neighbor into a friend.

And this is just the beginning! 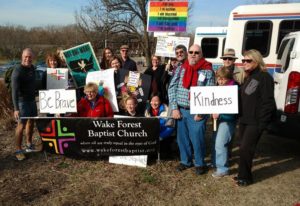 A lot of us are concerned about the direction that our country is going. The leadership seems more proficient at division and fear, than love and concern. The leadership seems focused on upsetting the status quo, and not worrying much about what gets broken, or who suffers, as a result. The leadership wants to “make America great” by scapegoating those who are “other.”

The Forward Together Moral Movement and its founder, Rev. William Barber II, shares those concerns, and has been working to build a coalition to put forward moral issues like these in the forefront of political discussion. This coalition is wide ranging, and ecumenical, and is focused on love, not hate.

At least 26 of us traveled to Raleigh last Saturday to participate in the 2017 Moral March, also known as HKOJ (Historic Thousands On Jones St.) It’s hard to guess crowd sizes, but it is a safe bet that there were more than 20,000 people there, with a wide range of interests and concerns.

We were proud to have made the journey to stand in solidarity and to be counted along with our brothers and sisters concerned about injustice on the basis of race, religion, national origin, economic class, gender, or sexual orientation.

It will take more than marching to bring love to the oppressed and justice for all, but it’s a start.

Here’s a part that I found particularly touching:

But my momma’s here… eighty three years old…
She had me, two days after the March on Washington…
She said, I never thought I would have a baby,
that when he was fifty years old, he’d still be fighting,
some of the battles that I fought…
But she said, Boyyyyyyy you’d better Fight!

‘Cause Bowing Down Is Not An Option!

The weather was good, spirits were high, and everyone seemed to feel like the effort to stand up and take part was worth it.

As you can imagine, there’s a lot of work that goes into an expedition of this size. I’d like to thank Eve and Steve Andrews, Judy and Terry Lovelace, Elizabeth Corney, and Drew McCarthy for all their hard work. And many of you made contributions too, from camp chairs to financial resources. Special thanks to all of you who marched, too! 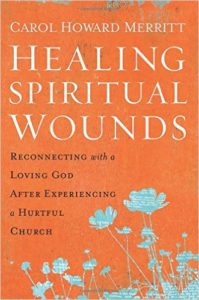 This Sunday, February 19, Carol Howard Merritt will join us in worship. She is the author of Healing Spiritual Wounds: Reconnecting with a Loving God after Experiencing a Hurtful Church.

Carol is a minister whose writing, speaking, and teaching are anchored in theological wisdom and sociological insight. She’s a sought-after keynote speaker, especially on the topic of ministering in a new generation, and the award-winning author of Tribal Church: Ministering to the Missing Generation and Reframing Hope: Vital Ministry in a New Generation. Carol is a frequent contributor to books, websites, magazines, and journals. She is a regular writer at the Christian Century where her blog is hosted. Her new book will be available for purchase by check or credit card.